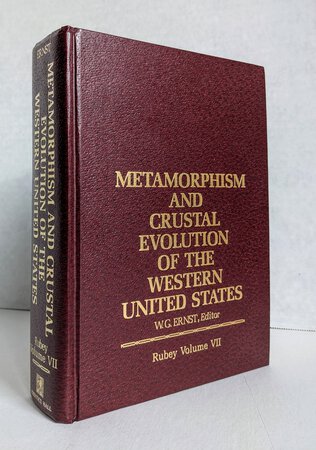 METAMORPHISM and CRUSTAL EVOLUTION of the WESTERN UNITED STATES. Volume VII in the Rubey Colloquium Series. Edited by W.G. Ernst.

A collection of 40 papers by experts in geology, geophysics, seismology and plate tectonics.

SIGNED by Noted Geologist ROBERT G. COLEMAN on the front free endpaper. R.G. Coleman co-authored of one of the papers in this book, titled: "Tectonic and Regional Metamorphic Framework of the Klamath Mountains and Adjacent Coast Ranges, California and Oregon".

Hardcover Book, no dustjacket as issued, gilt titling on the front cover and spine, xii, 1153 pages. Illustrated with graphs, tables, charts and maps.

About ROBERT G. COLEMAN, who SIGNED this copy (from the National Academy of Sciences website):

******Robert Coleman, b.1923 d.2020, an internationally recognized geologic field mapper and geochemical mineralogist-petrologist, made enormous contributions to scientists knowledge of the geologic evolution of contractional continental-margin subduction zones and to the genesis of the ocean-floor-to-upper-mantle lithosphere (that is, ophiolites-sections of Earth's oceanic crust that have been thrust onto the edges of island arcs and continental margins). During four decades of studying the origin and geologic history of western California and southwestern Oregon, Coleman rose to become a world authority on circumpacific tectonics, petrogenesis of the oceanic lithosphere, and the petrotectonics of Alpine-Tethyan convergent suture zones, chiefly in central and eastern Asia. His Ph.D. thesis on the New Idria (central California) Mineral District was a classic work documenting protrusion, diapiric ascent, of a large, low-density ultramafic complex. Coleman received a Ph.D. from Stanford University in 1957. During his doctoral studies, he also worked for the Atomic Energy Commission and in 1954 joined the staff of the U.S. Geological Survey. Departing the USGS in 1982, he became a professor at Stanford until his retirement from academia in 1993, after which he continued productive research until virtually his dying day.******