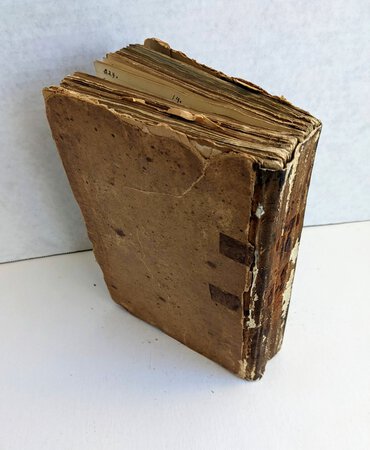 Unique manuscript collection of speeches by Dr. Oliver Troxell Everhart, a Civil War surgeon and prominent physician. He was very active in his community and belonged to various fraternal and medical organizations. He was often a featured speaker at events, commencements, medical meetings, etc. Includes table of contents and 80 handwritten speeches. The contents span from 1851, his freshman year at Marshall College to 1920, at age 89. Occasionally augmented with mounted newspaper articles. Includes his bookplate on the front pastedown.

The speeches are handwritten on mostly lined paper, 6x9 inches (15x23.5 cm). The pages are hand-numbered. Pagination: [4], 426, [30] pages. Most of the speeches are non-medical in nature. Titles of all the speeches can be seen in the photos of the contents pages.

CONDITION: The leather covered boards and spine are falling apart, spine mostly gone, boards worn and soiled, spine folds with old tape marks, etc. Internally, there is some foxing and finger soiling throughout, some speeches rather tightly bound in at the left margin, there is some edge wear and small tears here and there, page 146 has some pieces torn off that are laid in, the inner binding has seriously cracked at a number of places. Nonetheless the pages are complete, remain bound together with the string binding, and, most important, the writing is clear and fully legible throughout.

The book is titled: "A HISTORY OF THE EVERHART and SHOWER FAMILIES from 1744 to 1883, Embracing SIX GENERATIONS. Also A SKETCH of MANCHESTER, MD." It is EX-LIBRARY, bound in library hardcovers with the usual stamps, labels, pockets, and shelving numbers. There is a "withdrawn" stamp on several of the labels. Ex-lib aside the book is in GOOD condition, signs of general handling and wear, but still tight, bright, clean, clear and unmarked. The book was written and self-published by O.T. Everhart, M.D., primarily for family and friends. As such, the first edition is quite rare.

TWO ITEMS by O.T. EVERHART, M.D. - A One-Of-A-Kind Collection of Handwritten Speeches, and a Rare First Edition of the Everhart & Shower Families.

About OLIVER TROXELL EVERHART (from the Franklin & Marshall College Library website, and elsewhere on the Internet):

******Oliver Troxell Everhart (1832-1921) was a Union Army physician, captured briefly after a raid on Chambersburg before being released. While tending to the wounded he contracted chronic diarrhea, which after moving camps would eventually worsen into an inflammation of the spine which left him paraplegic and resulted in an honorable discharge. Despite his injuries, he continued to practice medicine in York and Perry counties in Pennsylvania before settling in Hanover in 1878. He was a prominent physician, eventually joined in practice by his son Dr. George S. Everhart. He practiced medicine until his death in 1921.******