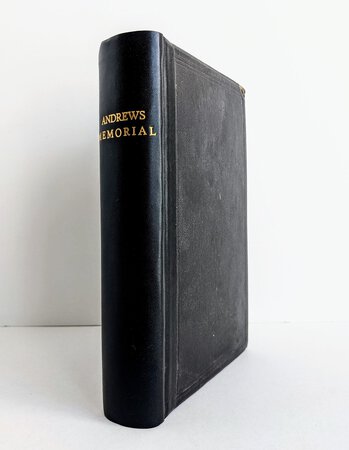 1872 GENEALOGICAL HISTORY OF JOHN AND MARY ANDREWS, WHO SETTLED IN FARMINGTON, CONNECTICUT in 1640 ***SIGNED First Edition***

ENEALOGICAL HISTORY OF JOHN AND MARY ANDREWS, WHO SETTLED IN FARMINGTON, CONN., 1640: Embracing Their Descendants to 1872; with an Introduction of Miscellaneous Names of Andrews, with Their Progenitors as Far as Known; to which is Added a List of Some of the Authors, Clergymen, Physicians, and Soldiers of The Name. By ALFRED ANDREWS, New Britain, Connecticut.

SIGNED and DATED "1895" by CHARLES ANDREWS, b.1827 d.1918, on a blank prelim. Charles Andrews was one of the longest serving judges in the history of the New York Court of Appeals. He also served three years as Mayor of Syracuse, New York.

BOOKPLATE of his SON, CHARLES WALKER ANDREWS, b.1861 d.1946, on the front pastedown. Charles Walker Andrews was a lawyer, book collector, and early member of the Grolier Club.

Hardcovers, professionally rebound covers and endpapers (likely by Charles Walker Andrews), 6x9 inches (15x23 cm), 652 pages. Illustrated with portraits interspersed throughout, each printed on heavy stock paper and protected with a tissue guard. There is a sheet tipped-in on a blank prelim with a handwritten "Line of Descent" that likely relates to Charles Walker Andrews.

GOOD condition, the covers are worn at the corners and some places along the edges, but remain sturdy and are doing their job well; internally the pages have toned, there are a couple of genealogical additions and corrections here and there, otherwise tight, bright, clean and clear. A solid, nice, presentable copy.

The 1872 First Edition is SCARCE, especially so SIGNED by CHARLES ANDREWS and with the BOOKPLATE of his son CHARLES WALKER ANDREWS. (Beware the 1972 reprints and Print-on-Demand copies.)

About CHARLES ANDREWS and his son CHARLES W. ANDREWS (from page 417 of the book):

******Syracuse, N. Y. - HON. CHARLES ANDREWS, fourth son of George, of New Britain, Conn., Whitestown and Troy, N. Y., and his wife, Polly Walker, of Butternuts, N. Y., born 27th May, 1827, at Whitestown, Oneida County, N. Y. He is a lawyer by profession, of the firm of Sedgwick, Andrews & Kennedy, of Syracuse, N. Y., of which city he has been mayor some three years, and has an enviable reputation and an irreproachable private character. He married 17th May, 1855, Marcia, daughter of Judge Shackland, of Syracuse, N. Y. He is judge of the court of appeals of the state of New York, and was living in Syracuse, N. Y., in 1871.