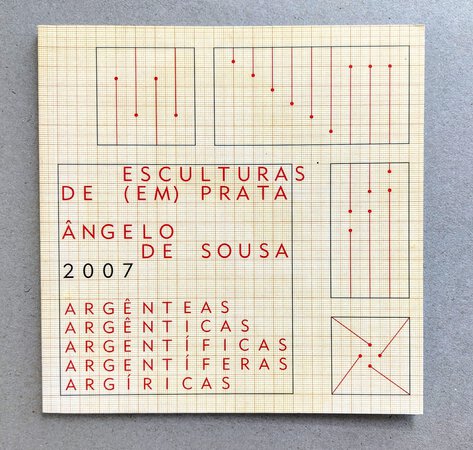 ANGELO DE SOUSA. Catalog for the exhibition of his silver sculptures that took place from December 1, 2007 through February 3, 2008, at the Galeria Nova Ogiva, Obidos, Portugal.

VERY GOOD condition, there is a thumbprint size light crease to the top margin of the pages, otherwise tight, bright, clean, clear and unmarked.

About ANGELO DE SOUSA (from Wikipedia):

******Angelo Cesar Cardoso de Sousa, b.1938 d.2011, was a Portuguese painter, sculptor, draftsman and professor, known for continuously experimenting with new techniques in his works. He was seen as a scholar of light and color who explored minimalism in radical new ways.

Angelo de Sousa had his first solo exhibition in 1959 and since then his works have been shown worldwide. In 1975 he received the International Prize of the 13th Sao Paulo Art Biennial and in 2007 the Calouste Gulbenkian Foundation presented him with the Gulbenkian Prize.******