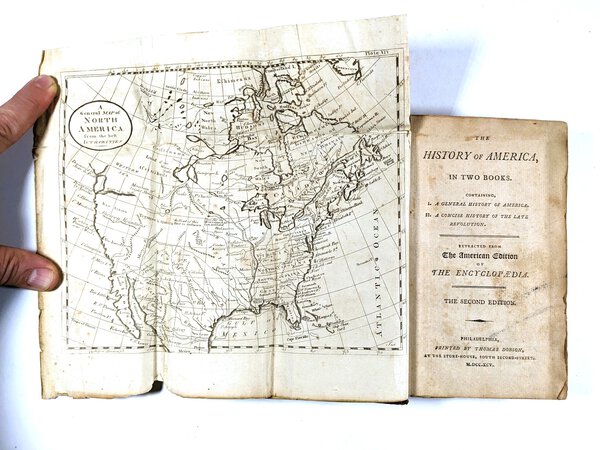 1795 THE HISTORY OF AMERICA in TWO BOOKS (bound in ONE, as issued) with 2 FOLDING MAPS Philadelphia: Dobson

THE HISTORY OF AMERICA in TWO BOOKS. Containing, (I) A General HISTORY OF AMERICA. (II) A Concise HISTORY OF THE LATE REVOLUTION. Extracted from The American Edition of The Encyclopaedia. (Attributed to Jedidiah MORSE.) The TWO BOOKS are published in this ONE VOLUME, as issued.

Contains the called for TWO FOLDING MAPS: (1) A General Map of North America, 7x8.25 inches, and (2) South America, 7x8.25 inches. The maps are numbered Plate XIV and XV, as they were numbered in the Encyclopedia. Both maps have the name "Scot" printed at the lower right. Robert Scot was a noted Philadelphia engraver who engraved a number of important maps and was an engraver for the U.S. Mint.

GOOD Condition: The covers are rubbed, worn at the edges and spine ends, and the front cover hinge is split at the top 4 inches but holding. Internally, the pages are lightly age toned, there is just some light foxing here and there throughout, more substantial on the first and last few pages, otherwise the pages are tight, bright, clean, clear and unmarked.. The two folding maps have white cloth reinforcement to their folds on their blank backsides, have a few edge chips and fold edge closed tears, stiffness at the folds, and some areas of foxing and age toning, but overall are well preserved, bright, and clear. One of the nicer copies of the book that I have seen.

Rare 1795 edition with BOTH MAPS as called for.

About JEDIDIAH MORSE, the acknowledge author (from Wikipedia):

******Jedidiah Morse, 1761 d.1826. was a geographer whose textbooks became a staple for students in the United States. He was the father of the telegraphy pioneer and painter Samuel Morse. His textbooks and maps earned him the sobriquet Father of American Geography.******

About ROBERT SCOT, the maps engraver (from Wikipedia):

******Robert Scot, b.1745 d.1823, was a Scottish-American engraver who served as Chief Engraver of the United States Mint from 1793 until his death in 1823. Scot designed the popular and rare Flowing Hair dollar coinage along with the Liberty Cap half cent.

In 1781 Scot began engraving for Robert Morris, then Superintendent of the Office of Finance of the United States. The paper money that Scot engraved for Morris helped to finance the Siege of Yorktown, the decisive battle of the American Revolution. Shortly after that battle, Major Sebastian Bauman commissioned Robert Scot to engrave a map that illustrated the American victory,

In 1790 Thomas Dobson began to publish an American Edition of the Encyclopedia Britannica. Robert Scot engraved the largest number of engravings for Dobson's Encyclopedia, including some important maps. The quality of his engravings helped to rapidly expand the publication of illustrated books within the United States.******