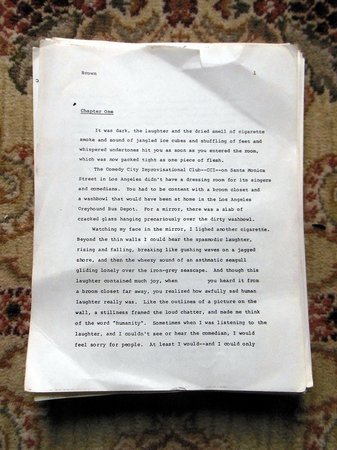 Typescript Draft of the novel DAYS WITHOUT WEATHER by CECIL BROWN, an African-American author and screenwriter.

Copy of an original draft typescript. This early photocopy of the original typed pages was probably made for distribution to agent, editor and/or publisher.

Accompanying this typescript draft is a HAND SIGNED and INSCRIBED First Edition of DAYS WITHOUT WEATHER. Hardcover book in dustjacket, 5.5x8 inches, 250 pages. Published by Farrar Straus Giroux, 1983. "First Edition 1983" stated on the copyright page. The inscription is on the front free endpaper: "To Stanley / Here's to the new friendship! / Cecil Brown / Sept. 6 1987".

SCARCE WORKING DRAFT of the BITTER & FUNNY NOVEL "DAYS WITHOUT WEATHER" by the BLACK NOVELIST and SCREENWRITER CECIL BROWN, along with a first edition, signed and inscribed copy of the published book.

About CECIL BROWN (from Wikipedia):

******Cecil Brown, b.1943, is an African-American author, screenwriter, and professor at the University of California, Berkeley. His noted works include The Life and Loves of Mr. Jiveass Nigger and work as a screenwriter on the 1977 Richard Pryor film Which Way Is Up?

Born in rural Bolton, North Carolina, Brown attended North Carolina Agricultural and Technical State University of Greensboro, North Carolina, where he earned his B.A. in English in 1966. He later earned his Ph.D. in African American Studies, Folklore and Narrative from the University of California, Berkeley. He is currently a Professor at U.C. Berkeley in the African American Studies Department. His published books include: The Life and Loves of Mr. Jiveass Nigger (1969); Pryor Lives (1969); Days Without Weather (1983); I, Stagolee (1993); Stagolee Shot Billy (2003); and Dude, Where's My Black Studies Department? (2007).