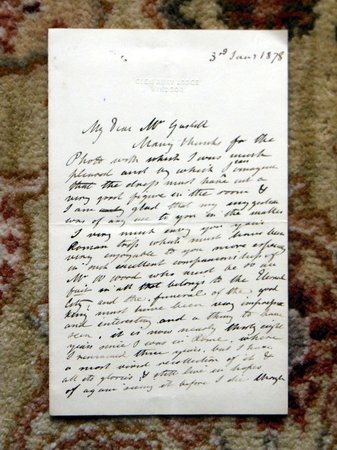 HANDWRITTEN LETTER by EDWARD MATTHEW WARD to FRANK GASKELL. Stationery is blind-stamped engraved "Glen Aray Lodge, Windsor". The letter is dated 3rd January 1878. (Ward died just 12 months later, 15 January 1879, a suicide.) Written on a single-fold piece of stationery, making 4 pages. The letter is on 2 pages, the front page and an inner page. The letter reads (as best I can make out): "My Dear Mr. Gaskell Many thanks for the Photo with which I was much pleased and by which I can imagine that the dress must have cut a very good figure in the room & I am glad that my suggestion was of any use to you in the matter. I very much envy you your Roman trip which must have been very enjoyable to you more [especially] in such excellent companionship of Mr. W. Wood who must be so au fait in all that belongs to the Eternal City, and the funeral of the gook King must have been very [impressive] and interesting and a thing to have seen. It is now nearly thirty eight years since I was in Rome, where I remained three years, but I have a most vivid recollection of it & all its glories, & still live in hopes of again seeing it before I die, though at present I see no probability of my being able to enjoy so great a pleasure in [the] future. It must have greatly altered since I was there & I have no doubt in the main for the better, especially in a sanitary point of view, though perhaps not altogether in [picturesqueness], but on one point I am sure it must have done so & that is in its government which when I was there was simply diabolical. I hope that we shall have the pleasure of seeing your father down here during his stay in London and immediately on receiving your letter yesterday I wrote a letter off to him at Wootton to be forwarded & I have no doubt that he will receive it tomorrow. I shall however send him a line to the Reform Club to make matters more sure, as I am most anxious for him to come down here and see the Windsor Tapestry Manufactory should he be able to spare the time. Mrs. Ward unites with me in kindest regards to Mrs. Gaskell & the rest of your family circle. & believe me, Yours ever Sincerely, E. M. Ward". CONDITION: The letter has a vertical and horizontal fold, perhaps from being folded to fit into a small envelope. The blank backside has paper remnants, as if the letter had been glued to a mount at some point and later removed. There is a small ink-stamped name on the black backside "K. J. Turner". The writing remains bright, clear and fully legible. Edward Matthew Ward RA (London 14 July 1816 - 15 January 1879) was an English Victorian narrative painter best known for his murals in the Palace of Westminster depicting episodes in British history from the English Civil War to the Glorious Revolution.