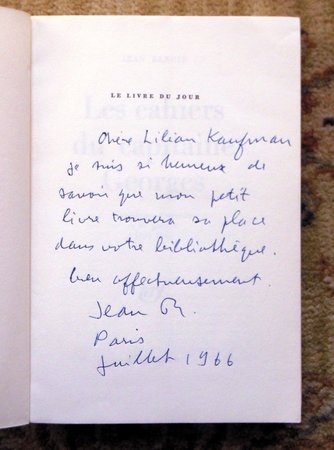 Warmly SIGNED and INSCRIBED by JEAN RENOIR on the half title page:

(Lilian Kaufman was the wife of the noted pianist Harry Kaufman who headed the piano department at the Curtis Institute of Music for 17 years. Harry and Lilian Kaufman were friends with many noted musicians, artists and writers. See more at the end of this listing.)

Condition: VERY GOOD book, some creasing and light staining to the upper corner of the front cover; light wear to the covers' spine ends and corner tips; a light crease to the upper corner of the inner pages; otherwise, tight, bright and clean; in a GOOD MINUS wraparound band, that has split at the top 2 inches of the front spine fold, the top 1/2 inch of the front flap fold, and the bottom 1 inch of the rear flap fold; and that has some general wear to the folds and spine ends, but remains bright and attractive.

RARE with the AFFECTIONATE INSCRIPTION and SIGNATURE of the GREAT FILMMAKER JEAN RENOIR.

About JEAN RENOIR (from Wikipedia):

******Jean Renoir (15 September 1894 - 12 February 1979) was a French film director, screenwriter, actor, producer and author. As a film director and actor, he made more than forty films from the silent era to the end of the 1960s. His films GRAND ILLUSION (1937) and THE RULES OF THE GAME (1939) are often cited by critics as among the greatest films ever made. As an author, he wrote the definitive biography of his father, the painter Pierre-Auguste Renoir, Renoir, My Father (1962). Jean Renoir was ranked by the BFI's Sight & Sound poll of critics as the fourth greatest director of all time.******

About HARRY KAUFMAN and his wife LILIAN KAUFMAN (from the UCLA Library Special Collections and other Internet sites):

Harry Kaufman, b.1894 d.1961, was a PIANIST and MUSIC TEACHER at the CURTIS INSTITUTE OF MUSIC, Philadelphia. For 17 years he headed the Department of Accompanying. He was also a successful piano soloist, performing with orchestras in the U.S. and Europe. He usually traveled with his wife, LILIAN.

The Harry Kaufman collection consists of correspondence between HARRY KAUFMAN, his wife LILIAN KAUFMAN, and people in the arts and music.

Lilian Kaufman was the avid letter writer, and through her correspondence developed lasting friendships with many noted musicians and artists.

This collection is in the UCLA Library, Department of Special Collections.******