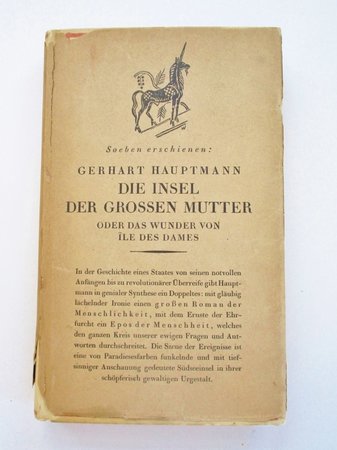 Die Insel der Grossen Mutter oder Das Wunder Von Ile Des Dames : Eine Geschichte aus dem Utopischen Archipelagus (The island of the Great Mother or The Miracle of the Island of Women : A Story from the Utopian Archipelago), by Gerhart Hauptmann. BERLIN: S. Fischer Verlag, 1924. Erste bis Funfundzwanzigste Auflage (First to Twenty-Fifth Printing). GERMAN BOOK, TEXT IN GERMAN. Hardcover Book in Dustjacket, beautifully illustrated paper covered boards, 4.5x7.5 inches, 373 pages. BOOKPLATE by the artist SIDNEY SIME is on the front pastedown. The bookplate has the printed name of MONTGOMERY EVANS II, a Pennsylvania aristocrat who was friends with many literary figures, including Lord Dunsany A quite lovely and rare bookplate. Sidney Herbert Sime (b. 1867 d. 1941, often S. H. Sime) was an English artist in the late Victorian and succeeding periods, mostly remembered for his fantastic and satirical artwork, especially his story illustrations for Irish author Lord Dunsany. The bookplate is printed with the name MONTGOMERY EVANS II, a Pennsylvania aristocrat who was friends with many literary figures, including Lord Dunsany. Montgomery Evans II was born on March 12, 1901 in Norristown, Pennsylvania to a wealthy lawyer and banker. Evans was an aspiring writer and aristocrat formed many friendships with literary figures of the 1920s. He was friends with Hunter Stagg, an editor of the Southern literary magazine, The Reviewer. It was through him that Evans was able to network and associate with literary figures such as Augustus John, Arthur Machen, Lord Dunsany, Walter de la Mare, and Aleister Crowley. Evans and Stagg went on a European tour in 1924 during which he spent time with Gertrude Stein, Ernest Hemingway, Sylvia Pankhurst, and Sylvia Beach. He died in 1954 from a head fracture due to a fall when he was drunk. CONDITION: VERY GOOD book, minor chipping to the bottom of the spine, toning to the covers edges, otherwise tight, bright, clean and unmarked. In a POOR dustjacket that is almost completely split along all its folds (a light tug and it will be split into several tugs), has several long closed tears, and s chipped along the edges and folds; nonetheless this original dustjacket is very scarce in any condition. Scarce Edition in a Scarce Dustjacket with a Scarce Bookplate and a Scarce Association.