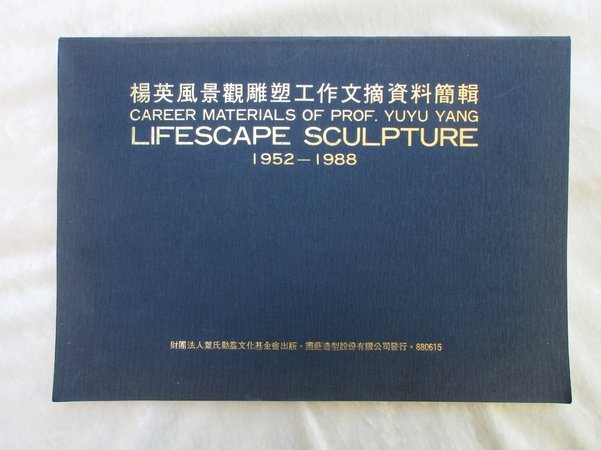 CAREER MATERIALS OF PROF. YUYU YANG: LIFESCAPE SCULPTURE 1952-1988. YUYU YANG (aka YANG YING-FENG) was one of the leading contemporary sculptors in Taiwan. He was also a noted

landscape architect, art theorist, writer, and educator. This book is a compilation of newspaper and magazine articles published between 1952 and 1988 about the sculptor and his works. Each article is reproduced as it originally appeared and in its original language, either Chinese or English. Softcovers, gilt titling on the front cover and spine, 10x14.5 inches oblong.

Illustrated throughout with b&w illustrations reproduced from the original newspaper and magazine articles. VERY GOOD condition, just lightly used and still tight, bright, clean and unmarked. An interesting chronological / biographical look at the life and works of Yuyu Yang as seen through the eyes of others who wrote articles about him and his works. About YUYU YANG: YUYU YANG (aka YANG YING-FENG), b. 1926 d. 1997, was a renowned TAIWANESE SCULPTOR, ENVIRONMENTAL DESIGNER and ARCHITECT. Yang produced more than a thousand works during his lifetime, ranging from prints, sculpture, and laser art, to landscaping and architectural designs, many of which were award winning and exhibited throughout the world. He also wrote more than 20 books on art. INTERNATIONAL BUYERS PLEASE NOTE: This is a large, heavy book, that will require additional shipping charges. After placing your order you will be notified of the additional charges and be able to accept or reject them before your payment is processed. Thanks.