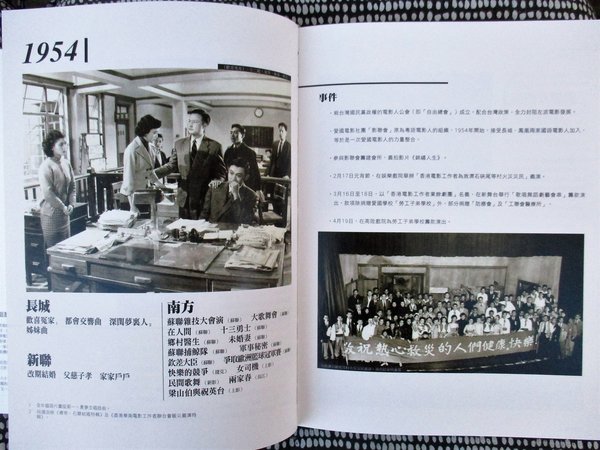 SILVER CAPITAL 60 YEARS 1950-2010. A Beautifully Produced and Illustrated Chinese Book depicting Sixty Years of Films made by notable HONG KONG FILM STUDIOS including the Great Wall Film Production Company, Phoenix Film Company, and Xinlian Film Company (all of which were predecessors of the Hong Kong Yindu Agency). TEXT COMPLETELY IN CHINESE, but filled with PHOTOGRAPHS of film stars, producers, and directors as well as FILM STILLS from many films. There are approximately 1000 photos in all. Thick softcover book with dustjacket, 8.5x11.5 inches, 607 pages. Illustrated throughout. Published by Joint Publishing Co., Hong Kong, 2010. ISBN: 9789620430411. VERY GOOD condition, tight, bright, clean, clear and unmarked. I found a Chinese description online, the following is a rough translation of it by Google: ******Hong Kong Yindu Agency Co., Ltd. was established in 1982. It was mainly formed by the merger of three old film companies, Great Wall Film Production Company, Phoenix Film Company and Xinlian Film Company (collectively known as Chang Feng Xin). The Southern Film Company, which is engaged in domestic film distribution, as well as the Qingshuiwan Film Studio and Yindu Entertainment, have made Yindu a film organization with a comprehensive film and television system for production, film, theater, distribution and advertising. It has been sixty years since the predecessor of Yindu, the Great Wall Film Production Company and the Southern Film Company (founded in 1950). In the past 60 years, the Yindu system has produced 480 movies and 11 TV series, and has released nearly a thousand domestic films. The mysterious history of light and shadow created by countless shining stars and filmmakers has become a common memory that fans of generations will never wear out. This book is the predecessor of Yindu (Great Wall, Phoenix, Xinlian, South, Qingshuiwan Studio) and even the 60 year history of Yindu, including the purpose of each company, the development of each stage, and the introduction and release of the company. The film, the editorial director's articles and interviews, as well as important film reviews, and finally ended in a large scale film The Master of the Generation (Director Wang Jiawei) to commemorate the 60th anniversary of Yindu. The book is divided into four chapters the ideal age, the rough years, the reconstruction days and the revival period. 11 experts and scholars from the Mainland and Hong Kong were invited to write an article to discuss the characteristics and positioning of Yindu and its predecessors. The authors include: Lefu, Huang Ailing, Shi Qi, Li Weitao, Lin Jinbo and Zheng Chuanqi. Mainland authors include: Zhao Weifang, Sha Dan, Zhang Yan, Li Xiang, Si Ruo. The book has a total of about 1,000 photos. The appendix includes a list of the film and television works of the Yindu system, a list of staff and an interview summary of the industry. It is an important reference book for studying the development of Hong Kong's leftist films.****** INTERNATIONAL BUYERS PLEASE NOTE: This book is heavy and will require substantial additional shipping charges. After placing your order you will be notified of the additional charges and be able to accept or reject them before your payment is processed. Or you can contact us ahead of time to find out the shipping charge to your country. Thanks.