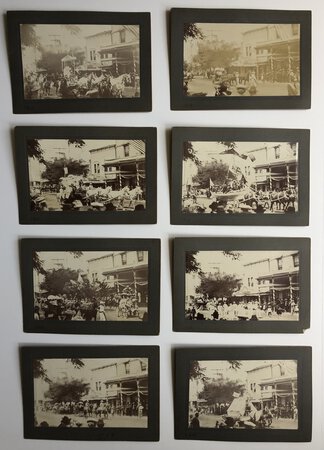 EIGHT Original 1903 FOURTH OF JULY PARADE PHOTOGRAPHS from the San Francisco Bay Area Contra Costa Gold Rush Town of ANTIOCH. Each large photograph is different yet connected, like a parade!

EIGHT Original 1903 FOURTH OF JULY PARADE PHOTOGRAPHS from the San Francisco Bay Area Contra Costa Gold Rush Town of ANTIOCH. Each large photograph is different yet connected, like a parade!

The photographs were taken at the Antioch, California Fourth of July Parade along Second street across from the Arlington Hotel (of true crime fame in 1906 but that's another story) which is next door to the Antioch Shoe Store (R.H. Wall, Proprietor) with the edge of the L. Meyers Store showing farther down the street. From this same vantage point each richly detailed photograph shows different scenes of the parade. Festive horse drawn carriages, Western riders, beautifully dressed spectators, decorated floats, marching bands, flower and flag draped scenery.

Eight (8) original 7" x 10" card mounted photographs circa 1903. One mount has HOIEN, ANTIOCH, CAL embossed on the front, the rest are unmarked.

VERY GOOD CONDITION: The photographs are bright and clean, the card mounts have light edgewear, 1903 is written in pencil on the front bottom margins, one mount has a penned number beneath the penciled date, one has a corner chip, the backs of the mounts have black paper remnants from being removed from an album, and a few have a penned name to the back top margin, and the mounts are slightly warped, otherwise a unique collection of original photographs.

The San Francisco Bay Area town of Antioch is one of the oldest towns in California. Founded in 1850 just after gold was discovered in the region, it was incorporated in 1872 and flourished as a mining, farming, and dairy community tied to the region by the railroad and deep water ports.